Opulence rises from nondescript past 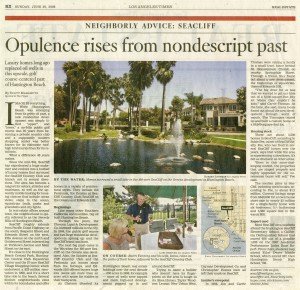 latimes.com — Image is everything.

When Huntington Beach was emerging from its gritty oil past, a new residential development was simply titled “upper” and “lower”, a no frills public golf course was years from becoming a private country club and a supposedly modern shopping center was better known for its elaborate roof-high bird murals than for its retail mix.

What a difference 40 years makes.

Since then, SeaCliff has experienced a huge makeover and evolved into an exclusive market of luxury homes that not only surround the SeaCliff Country Club, but branch out in several directions. The area has become a magnet for actors, athletes and musicians as well as the upwardly mobile looking for housing choices that include ocean views, steps to the ocean, equestrian trails, parks and greenbelts and city lights.

In real estate offices around town, it’s referred to as the Beverly Hills of Huntington Beach.

SeaCliff roughly extends from Pacific Coast Highway on the south, Seapoint St. and Edwards St. on the west, Ellis Avenue on the north and Goldenwest Street intersecting at Yorktown Avenue and Main Street on the East.

It’s close to the Huntington Beach Central Park, Huntington Central Park Equestrian center and the 27-acre SeaCliff Village Shopping Center, which underwent a $22 million renovation in 1998, and it’s a short bike ride to the beach.

Several neighborhoods exist within its boundaries and offer homes in a variety of archectural styles.  They include the Peninsula, the Estates at SeaCliff Country Club, SeaCliff on the Greens and Edwards Hill.

Through the years, the Chevron Land and Development Co. invested millions in the city. In 1964, the public golf course and two large residential developments sprang up and the SeaCliff brand was born.

The next big push came in the ‘80s when the 100-acre SeaCliff on the Greens was developed.  Also, the Estates at SeaCliff Country Club and The Peninsula put homes steps from the fairway and Edwards Hill offered buyers huge lots (some are more than an acre) with space for stables in their backyards

As Chevron divested its Huntington Beach real estate holdings over the next decade—600 acres in 1996, for example—more oil wells were capped and more high-end developments popped up in and around SeaCliff.

Try naming a builder who doesn’t have its fingerprints on the area is tough to do. Shea Homes, Taylor Woodrow, Lennar, New Urban West, Cayman Development Co. and Christopher Homes have all left their mark on SeaCliff.

In 1986, Jim and Carrie Thomas were raising a family in a small tract home behind St. Bonaventure Church on Springdale Street. Through a friend, they found about a new development, the beginnings of equestrian-themed Edwards Hill. “The big draw for us was that we wanted to get our kids out of a 6,000-square-foot city lot where they couldn’t be kids,” explained Carrie Thomas. At the time, she said that there wasn’t a lot of advertising being done so locals found out about it through word of mouth. The Thomases and built a custom home on a 16,000-square-foot lot.

There are approximately 3,500 homes in SeaCliff, according to Sukie Fee, owner of SeaCliff Reality. Fee, who has lived in several SeaCliff homes over the years, says that while the area is experiencing a slow down, it’s not as dramatic as other areas.

“Even in this more challenging market, the properties that are staged properly and highly upgraded for the no-nonsense buyer will sell,” Fee said.

The median price in Seacliff, including town houses, according to Fee, is about $1.2 million. Current listings range from $649,000 for a town home short-sale to nearly $3 million for a single-family home with six bedrooms, 5 ½ bathrooms and 5,388 square feet in Edwards Hill.

Most SeaCliff-area students attend the Huntington SeaCliff Elementary School, a California Distinguished School that scored 926 out of a possible 1,000 on the 2007 Academic Performance Index Base report. From there, students may attend Ethel Dwyer Middle School, which scored 837, then either Huntington Beach High School, 766.

An island of Calm amid the bustle of the O.C. 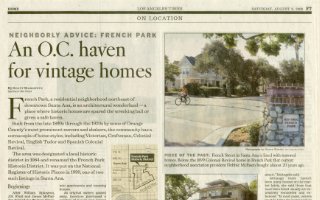 An O.C. haven for vintage homes 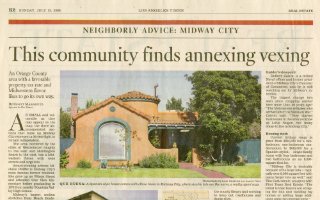 The skinny on a slice of O.C. beach life